Bosnia and Herzegovina is perhaps the best Balkan state to understand the rich cultural differences that fueled the tragic, violent breakup of Yugoslavia in the early 1990s. Bosnia sat at the crossroads of Yugoslavia’s three main cultural subgroups of ethnic Southern Slavs, which fell to fighting following Tito’s death: Bosniak Muslims (a little under half of Bosnia’s current population), Orthodox Serbs (a bit over a third) and Catholic Croats (around 15%). Despite its troubles navigating the post-war reality, the new nation remains home to maintaining vibrant communities of all three groups.

Bosnia’s Top Destinations
Even the battered capital of Sarajevo, which endured a brutal four-year siege, has restored the Ottoman-era old city center and surrounding Austro-Hungarian structures—though bombed-out districts and mortar holes do remain. Medieval Mostar, which flourished under the Ottoman Empire and is graced by Viennese Secessionist architecture, was a flashpoint of the 1993 Bosniak-Croat war. Today it is once again the nation’s showpiece, its lithe (rebuilt) stone bridge gracing just about every guidebook cover, mosque minarets spiking the skyline along with church spires, most inhabitants determined to put the dark recent past behind them and knit a new, pluralistic identity together.

Bosnia: Two Countries in One
Confusingly, while Bosnia does contain two semi-autonomous regions, they are not “Bosnia” and “Herzegovina.” Herzegovina is a vaguely defined historical subregion with no current physical or political boundaries. It’s just a name. The “Republika Srpska,” however, is its own sub-nation, a majority Serbian area (well, two areas, really) given some degree of self-rule over covering large portions of the northern and eastern parts of Bosnia to help keep the peace. Trebinje, with its medieval center and hilltop monasteries, is its best bit.

When to Go to Bosnia-Herzegovina: Bosnia is a largely temperate climate, though it does range from the mountains to Mediterranean shores, so there is variety. Spring is loveliest, summer a bit more humid, and autumn still nice but much less crowded.

ZFBH (Željeznice Federacije Bosne i Hercegovine) is one of the two railway companies of the Federation of Bosnia and Herzegovina, operating the Doboj–Sarajevo–Ploče main line. 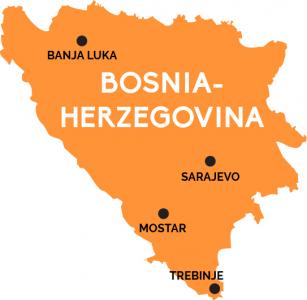