Finland lies at the border between the Scandinavian West and Russia to the east. A vast country eighty-six percent covered in forest (and its northern third lies within the Arctic Circle), Finland has 37 national parks and the lowest population density in Europe. Those 5.5 million people enjoy one of the world’s most stable and progressive governments, ranking among the highest in education, civil liberties, human development, overall happiness, and saunas per capita on the planet.

Finland’s Attractions: From the Lakelands to the Land of the Midnight Sun
The southern third of Finland comprises the gorgeous Lake Region, bulging with with more than 55,000 island-studded lakes. The Lake Region is ringed with industrial towns like Tampere (lovely cobblestone streets and modern art galleries—plus a Lenin Museum!), but its spiritual center is the city of Savonlinna, guarded by a 15th century castle on an island. From hip Helsinki—the world’s second northernmost capital, originally a Russian outpost modeled after St. Petersburg but developed in the 20th century with avant garde architecture—you can ride the train all the way to Kolari, hard by the Swedish border and gateway in the northern hinterlands of Lapland, where the Sámi people remain one of Europe’s last indigenous, traditional cultures.

When to Go to Finland: Unless you intend to ski, snowmobile, or dog-sled, skip the cold, brief days of winter. The long days of summer are best—though Finns vacation in August, crowding the prime vacation spots and saunas.

Finland’s VR is the country’s state-owned railway company. Their trains have extensive amenities and accessibility. They also offer restaurant services on all trains except for Regional. 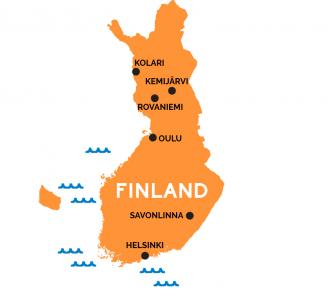