The heart of Scandinavia is a land of smorgasbord feasts and warm saunas, of the Midnight Sun in summer and the Northern Lights in winter. Sweden is a famously liberal country covered by pine forests and 100,000 lakes, with a high quality of life and enviably happy population, but it’s also a European economic powerhouse, home to IKEA and Volvo (not to mention ABBA). Stockholm is a world capital built on 14 islands (in an archipelago of 24,000 more) surrounded by forests.

The historic central core is on Gamla Stan, all baroque buildings on cobblestone streets and the Kungliga Slottet, the world’s largest royal palace still in use. For history head to Stockholm’s parklike Djurgården island for world’s oldest (and best) open air folk museum at Skansen and the Vasa Museum housing a well-preserved 17th century warship. South of Stockholm, through the lake-spotted forests of Småland (your pass get you discounts on the Småland narrow-gauge railway from Hultsfred to Västervik—not to mention on ferries to Finland, Germany, and the Baltics), you can visit Old World city of Kalmar with its Renaissance buildings and a massive medieval castle. Cross to gorgeous Gotland island to tour the medieval Hanseatic-era walled city of Visby. Strike out for the west coast and Gothenburg, Sweden’s second city, a relaxed and cosmopolitan burg with a more mainland European flair (it was largely built by the Dutch in the 17th century).

Hop the train to head north to Jokkmokk, above the Arctic Circle in the remote, rugged Lapland region where indigenous Sámi people still herd reindeer and the preferred modes of transportation in winter are snowmobile and dog sled. Then turn down to the Gulf of Bothnia and the university town of Luleå to see the UNESCO Heritage Site of Gammelstad, an historic church town of wooden houses.

When to Go to Sweden: The sun shines brightest in summer—indeed, from June through mid-July the sun never sets in the north (the south gets a wee-hours twilight). Spring (April-May) with its wildflowers and autumn (Sept-Oct) with its colors are also nice—though winter arrives early and stays late, with frosts starting in September and true cold seeping in from late October and lasting through March.

Events and Holidays in Sweden:

Sweden’s historic cities and gorgeous forested lake country are very accessible via the state-run rail service Statens Järnvägar (SJ). Construction of the first railway line in Sweden began in 1855, and the rail network is intricate… 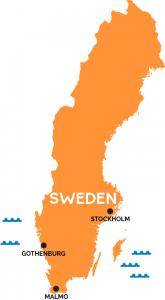