The Emerald Isle still lives up to its reputation. It is a vast quilt of sheep-dotted green fields sprinkled with ruined Celtic forts and tombs. Ireland’s tidy towns have friendly shopkeeps hawking thick Irish sweaters and churchyards filled with Celtic crosses; its roadside hamlets of thatched roof houses really do have pubs where the locals gather to drink Guinness and get up a session of traditional music by a peat fire.

But for all of the Romantically roofless ruined abbeys, medieval castles, and bustling fishing ports and market towns, Ireland is also a modern nation, and among the worst hit by the economic crises (Ireland actually suffered a punishing double-bust; the go-go “Celtic Tiger” economy that boomed in the 1990s petered out right around the same time as the global economic collapse of 2008). Luckily, that means Irish prices have returned a bit from the stratosphere, and the sudden suburban sprawl that was threatening the country’s rural postcard image has sputtered to a halt.

Most visitors still come to explore that storied countryside, the landscapes and small towns of the West Country in Kerry, Clare, and Galway, or the wilds of northern Donegal—but no longer are they overlooking Dublin. Dublin used to be just a place to pass through: a quick stop to admire the Book of Kells, the world’s most famous illuminated manuscript, at Trinity College; to see golden Celtic jewelry at the Archaeology Museum; and maybe to drain a few pints at a Temple Bar pub. Increasingly, though, the capital’s literary sights, bevvy of museums, lovely Georgian residential squares, and ever-lively cultural scene are beckoning you to stick around longer.

When to Go to Ireland: Ireland is at its loveliest shade of green from mid-spring through summer—though it does tend to rain a lot in the springtime. Though its waters are warmed by the Gulf stream, it is still a damp North Atlantic air that can make temperatures feel a bit colder than most people expect—there’s a reason they are famous for thick sweaters—so pack warmly (or prepare to bring home some woolen souvenirs). 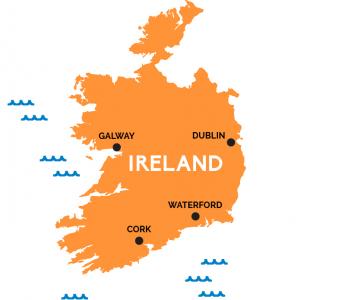