Paris is awash in tourism icons—the Eiffel Tower, Mona Lisa’s smile, the Arc de Triomphe, Nôtre Dame cathedral, It is a city where the cuisine at Michelin-starred restaurants and fashions on rue du Faubourg St-Honoré are considered art forms as exalted as the canvases in the museums of the Louvre, Orsay, and Pompidou. Just as memorable, however, can be a picnic of French cheeses, pâtes, fruit, a crusty baguette and bottle of red wine—a meal worthy of King Louis XIV enjoyed in the elaborate gardens of his royal palace at Versailles, a short train ride outside Paris.

Beyond Paris
France has perfected the art of living well and wowing visitors with everything from the châteaux of the Loire Valley to the wine regions of Burgundy, Bordeaux, and Champagne, and from the heights of Europe’s tallest peak at Mont Blanc to the fishing villages and hilltowns of Provence that inspired van Gogh, Cezanne, and Matisse.

France’s intricate rail network and high-speed TGV trains make it a snap to get anywhere. You can ski the Alps in Chamonix or relax on the beach at a jet set resort on the Côte d’Azur of the French Riviera, visit the medieval island monastery of Mont-St-Michel or tour prehistoric cave art in the Dordogne. En route to the D-Day beaches of Normandy, stop at Rouen and see the thousand-year-old Bayeaux Tapestry, the spot where Joan of Arc was burned at the stake, and the Gothic cathedral made famous by the paintings of Monet.

When to Go to France: France’s climate varies from the temperate north along the English Channel to the sun-broiled Mediterranean in the south, flanked by the mountain air of the Pyrenees to the southwest and Alps in the southeast. Spring and fall are generally the best times to visit for moderate temperatures and crowds. The beaches of the Riviera are packed in summer—and Paris takes off for vacation in July and August, so while the city can seem overrun by tourists it’s actually a bit less crowded than in June (just be sure to spring for a hotel with A/C). 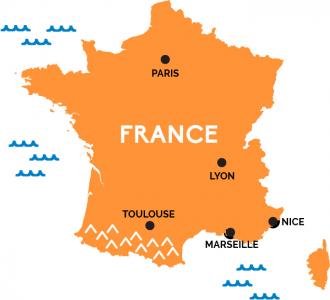