Turkey is a land of whirling dervishes and Roman ruins, hammam baths and coastal cruises, Christian holy sites and mosque minarets spiking the skies. It also just may be the most culturally diverse country in Europe. Stretched along the Black Sea from the Caucasus to the Aegean, Turkey is where the Mediterranean meets Central Asia and the Middle East mingles with the Balkans.

It is also one of the friendliest places on earth, where an invitation to tea is not just a polite formality but a sincere offering to begin a new friendship (or sometimes just to close the deal on a rug sale—but still, a friendly one). Istanbul, straddling the wide Bosphorus and two continents, was capital of the Eastern Roman Empire, Byzantium, and the Ottoman Empire. Such rich history has left this bustling city strewn with magnificent sights, from glorious mosques to the sprawling Topkapi Palace of the Ottoman sultans, the labyrinthian 4,000-stall Grand Bazaar to leisurely boat rides on the Bosphorus Strait separating Europe from Asia.

Turkey is vast, and you could spend a lifetime exploring it, but among the don’t-miss destinations are poppy-strewn ruins of Ephesus, where the Apostle Paul once preached, one of the world’s best-preserved ancient Roman cities. Staying in a cave home tunneled into the tufa followed by a sunrise balloon ride over the stunning rock pinnacles of Cappadocia is a classic Turkish experience, as is a soak in the dramatic hot springs of Pamukkale, a series of azure travertine pools stair-stepping down a hillside. Turkey is incredible from the beaches of the Turquoise Coast to the cliffside monasteries of Northern Anatolia, the islands of the Aegean to the Kurdish villages in the eastern Tigres and Euphrates Valley, the cradle of modern humanity

When to Go to Turkey: The shoulder seasons of spring and fall are best for Turkey, with mild but generally warm weather and fewer crowds than at the height of the often sweltering summer. Istanbul is a year-round kind of town, but smaller centers and the coast tend to shut down during winter.

Events and Holdiays in Turkey:

Known for its exotic mix of religions, culture, and food, Turkey is a must-see destination, its far-flung sights easily linked by the government-owned Turkish State Railways, known as the TCDD. The TCDD was formed in… 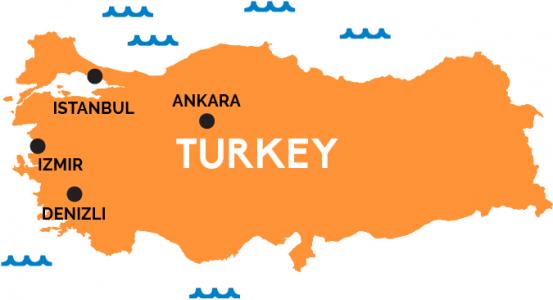