Miniscule Montenegro is one of Europe’s smallest countries—and its youngest, separating itself officially from the former Yugoslav state of Serbia on October 22, 2007. Barely bigger than Puerto Rico and home to just over 620,000 people, its name means “black mountains”—whether rendered in Montenegrin as “Crna Gora,” or in the Italian translation by which “Montenegro” is more widely known.

The Bay of Kotor
These dark, rugged peaks plunge into the Bay of Kotor like an Adriatic version of a deepwater fjord ringed by Venetian-inflected medieval villages, like Budva, and the walled city of Kotor, a UNESCO World Heritage site. Montenegro is a land of hidden surprises, like the Byzantine-era ruins of Stari Bar, the abandoned old town decaying in the forested hillside high above the (dull) modern ferry port of Bar.

Into the Black Mountains of Montenegro
Though most visitors stick to the short Adriatic shoreline interrupting Croatia’s coast, Montenegro rewards those who venture into its mountainous interior. As you climb hairpin roads from the coast up over those menacing black mountains, you pass the genteel backwater of Cetinje, the fading glory of it buildings attesting to its (brief) status as Montenegro’s royal capital in the late 19th century.

You can visit the Balkans’ largest lake, Skadar, a renowned bird sanctuary on the Albanian border, or Durmitor national park to raft the Tara River thundering through Europe’s largest gorge, up to 4,300 feet deep and flanked by steep karst cliffs.

When to Go to Montenegro: The coast has a temperate Mediterranean climate, best enjoyed in spring or fall (summer can get hot and sticky—and Kotor, especially, can get overwhelmed by cruise passengers).

Known for its cultural heritage and gorgeous Adriatic coastlines, Montenegro has an easy-to-access rail network so passengers can make their way throughout Europe with ease. 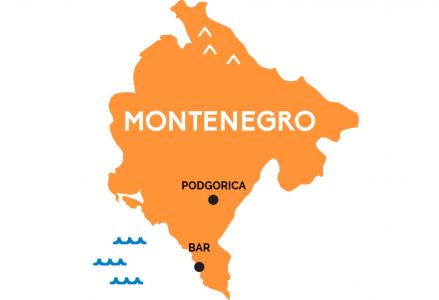