Greece is the wellspring of Western culture, a living textbook of ancient history dating back to its glory days in the 5th century BC. In Athens you can marvel at the mighty Parthenon and other temples atop Acropolis hill then descend through the medieval streets of the Plaka neighborhood to wander the ancient marketplace of the Agora, now a museum dedicated to the machinery of the world’s first democracy.

On mainland Greece you can climb to the top of Mount Olympus, home of the Greek gods; explore Metéorea, where medieval monasteries perch atop pinnacles of rock; and consult the oracle at Delphi, where the Greeks believed a priestess, sitting at the center of the world, could foretell the future and the fates of heroes. But it’s not all dusty ancient columns, marble statues, and museums.

The Aegean and Mediterranean Seas around Greece are peppered with hundreds of islands, large and small, rimmed with beaches and scattered with villages of whitewashed houses. You can hike Samariá Gorge and visit Minoan palaces on the massive island of Crete, party hearty on Mykonos, delve into history on Rhodes or Pátmos, and sip island wine while watching the sunset on Santorini from the rim of a collapsed sea volcano whose ancient eruption just might have inspired the legend of Atlantis. Even better, you can get a discount on inter-island ships if you use your railpass to take the superfast ferry from Italy to Greece.

When to Go to Greece: Greece has the classic Mediterranean climate: hot and dry. Temperatures, prices, and crowds soar in July and August—especially on the islands. Then again, in winter the islands (and many mainland destinations) are half shut down—and the weather can get nippy.The best times to visit are late spring and early fall. 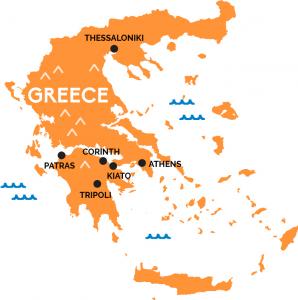