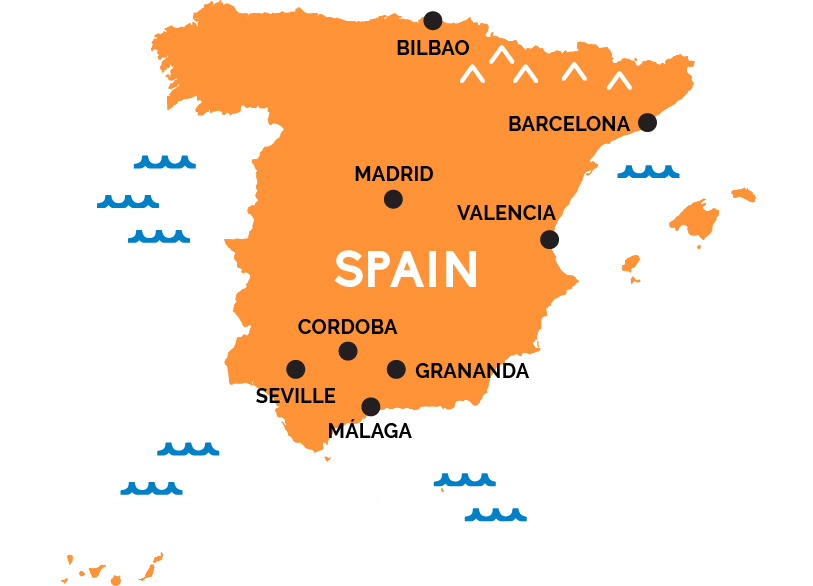 Welcome to the land of flamenco and tapas, siestas and bullfights, holy pilgrimage shrines and medieval Arabian pleasure palaces.

Spain’s capital, Madrid—packed with amazing museums—sits pretty much in the center of this large Mediterranean country across the Pyrenees from France, with high-speed rail connections to the nation’s far-flung cities. Most trains into Spain pass first through the northeastern border town of Irún (near San Sebastián, just east of Bilbao, capital of the northern Basque country), or through Barcelona, a beautiful and bohemian city at the eastern end of Spain’s southern, Mediterranean coast, and the capital of its own autonomous province, Catalunya (Catalonia).

Southwest down the coast from Barcelona is Valencia, capital of paella country, and, eventually, the famed beaches of the Costa del Sol and Costa de la Luz around Málaga. These beaches are in the southernmost Spanish province of Andalusia, the most Arab-inflected part of Spain. Andalusia’s great cities—Granada, Cordoba, and the regional capital of Seville—offer amazing architecture and rich cultural traditions, and the bars echo with flamenco music late into the night. In the northwestern province of Galicia, hanging above Portugal, is the pilgrimage capital of Santiago de Campostela. Off the southwestern coast lie the Balearic party islands of Ibiza, Minorca, Majorca, and Formentera. (The Spanish Canary Islands are in the Atlantic Ocean, off the coast of Morocco.)